First wave of feminism began in the early 19th century whereas the red flags were seen much earlier in the late 18th century with the beginning of French feminism and through the writings of Mary Wollstonecraft. Wondering why are you reading this in an article which is supposed to be about Artificial Intelligence? The point which needs to be highlighted is whether Artificial Intelligence progressive as it is expected or rather, strangled by the claws of gender bias just like human society. The researchers, even the general users too, have found traces of Sexism in Artificial Intelligence as well. When the times are actually moving where the world has started accepting LGBTQ+ community do we see AI accepting it as well? Therefore, this blog is entitled to shed a light on Gender Bias in Artificial Intelligence.

Moving from voice assistant to chatbots to text analysis, we see gender bias in each and every aspect though after much rebuke and taking it social media, changes have been made. But there still stands a question that whether it is enough to make a few changes or do we need to find a permanent solution where any individual does not feel discriminated against.

Still much hasn’t changed, it is not only about the non depiction of queer community but also about how it represents the ‘other sex’ or gender. Whether AI is able to give an equal platform to all or whether it still holds the bias it has been trained with? The answer is NO, there are still much left to be curetted where the discrimination is still visible and that too with naked eyes. For example, the default voice of any voice assistant whether it is Apple’s Siri or Amazon’s Alexa or Microsoft’s Cortana or even Google Assistant has been set on a female voice as the default voice. The question which arises with the same is why does even the AI associate a female with the term assistant just like we humans do. Why can’t the default voice be that of a male? Even the names opted by both Apple and Amazon are feminine in nature; namely Siri, Cortana and Alexa. Just like the humans, Artificial Intelligence to consider women or any other sex/ gender for that matter inferior to that of a man. With the growing social media network, the topic soon came into limelight wherein, as a concession for the same, a male voice or voices with all the accents too was added to the list wherein the user gets the option to change the voice assistant as per his/ her choice. Still, one thing remains constant and that is the default voice of the Voice Assistant is that of a female.

The problem not only ends with the voice assistant, the same lies with the chatbot and text analysis as well. Our newly equipped smartphones face similar issues. With the coming of emoticons, user chat experience has improved a lot but to our disappointment the dark shadows of gender discrimination has also invaded the space of Artificial Intelligence. For example, write the CEO in your chat box, the emoticon referred for you to select and send will be that of a male figure. Even if you write ‘She is our CEO’, in that case as well the emoticon remains the same. Screenshot of an iOS chat box is also attached below as an example to explain the same. 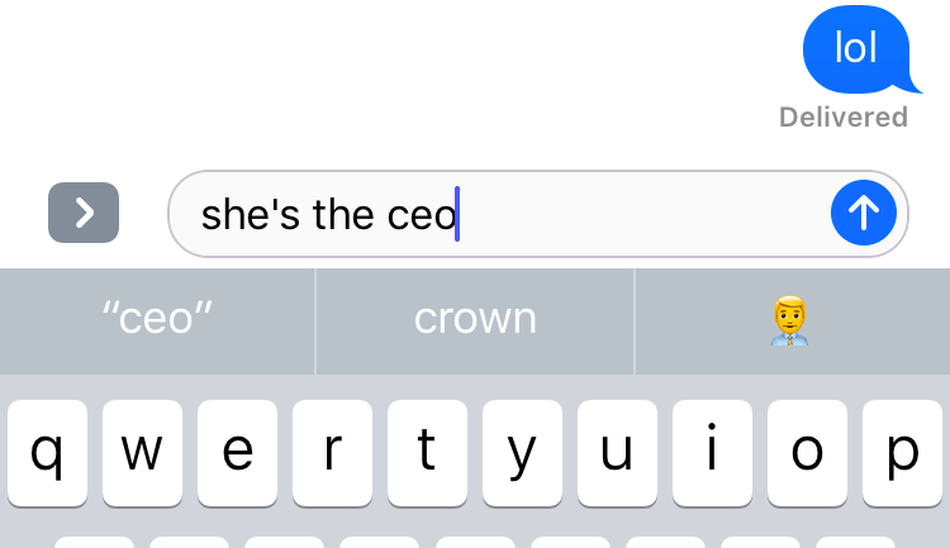 Natural Language processing of an AI system has been recognized with high rating Gender Bias errors in their text analysis and chatbots where they give you Auto fill preferences as well. An article from Harvard Business Review underlines that the auto fill will definitely highlight a woman with inferior designation. For example if you type ‘As Father is to Doctor, as Mother is to’ then the suggestion put forward for you will be ‘Nurse’. Moreover, this highlights that AI has engulfed the stereotypes associated with women and is now showcasing the same mirror to the humans.

One of the main reasons for such an error to stay stagnant throughout the time is the gender ratio gap in the AI industry. 78% of total AI professionals are male; and, as per the opinions of the AI researchers and scholars this is one of the main reasons for the same as AI algorithms are mostly run by them, based on the database they seem fit and decides the machine to feed. And as per the reports of the economic forums, three countries namely; America, Germany and India lead the AI Industry and are also the same where this gender gap is transparently visible.

AI and Big Data is the ultimate reason for the fourth Industrial Revolution to even begin and, here we are facing the darker side of Artificial Intelligence which is a product of our own brain. AI researchers and Data Scientists are one of the top notch people who can make a difference to this emerging technology by being more accountable and responsible. Just a quick recheck and much more awareness towards what they are feeding the machine will all it take to invert the present situation.