Are millennials and Gen Z obsessed with Snapchat? Oh wait, everyone is. Snapchat is not only famous with the contemporary generation but also with people from an earlier era. Snapchat has become an integrated part of people’s lives. The tagline for the application says, “Life’s more fun when you live in the moment :)” but instead exactly opposite happens, people take it as “capture the current moment”. People do not contemplate something as occurred if it has not been recorded through the lenses of a camera. The experience needs to be shared to exist. Maybe Snapchat’s slogan is that you need to share your life right at the moment.

From various celebrities to influencers and general audience, using Snapchat in their daily lives has become a huge part. The number of users of this application has increased to an astonishing number. But in contradiction to this are some celebrities who have shown their outrage for Snapchat, naming a few are Rihanna, Kylie Jenner, Chrissy Teigen, Suzie Nguyen, and Marques Brownlee. What made them celebrities and a lot of people not satisfied with Snapchat’s user experience? From a content creator’s perspective, Marques made the argument that Snapchat had become obsolete, collecting at its terrible quality on Android, and its failure to keep up with copycat features by Instagram. Moreover, Chrissy Teigen believes in the separation of stories, and how the update split off a user’s friends’ Stories from Stories that they follow — all of which makes celebrities like her harder to find. While Rihanna and Kylie question the ethics of Snapchat with respective to its controversies about application operations with compromising the ethics of user experience.

Here is an article about a fair and transparent review of Snapchat, being one of the most popular applications in 2021.

With more than 500 million downloads on the Google Play Store alone, and over 160 million active users each day, Snapchat caught the attention of mobile app and UI designers. Snapchat believes that reinventing the camera represents its greatest opportunity to improve the way people live and communicate. They contribute to human progress by empowering people to express themselves, live in the moment, learn about the world, and have fun together. Do their users and audience feel the same way or a little different? With the world changing so fast and technology rapidly upgrading, how do people perceive the changes these applications make to remain on top?

Let us take a brief analysis of the application and its user experience.

Snapchat lets you effortlessly talk with friends, view Live Stories from around the globe, and delve into the news in Discover. People want to discover content that suits their taste, but it is difficult because recommendations created by algorithms cannot match our wide tastes and takes an extended time to browse and decide if we like them. Snapchat has merged all news. Some of the popular Snapchat accounts that users followed have moved to the discover section, and this has added confusion whether they are news or stories. 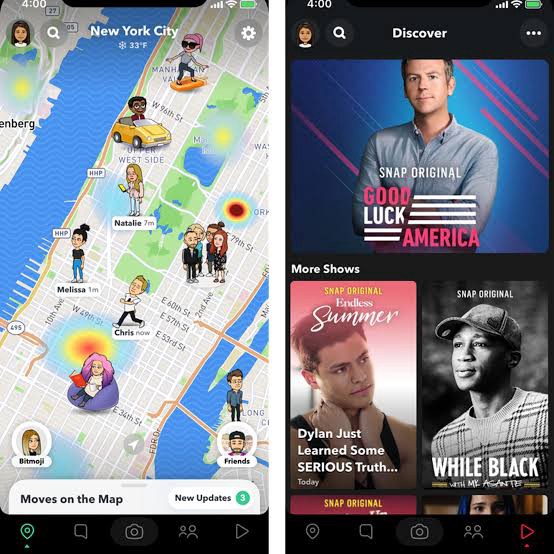 Snapchat has a tasteful choice with features when it comes to impressing its users. Considering that majority of its targeted audience is teenagers and adults, it offers a variety of features making the camera game more fun and engaging.

Geo filters, location sharing, lenses and Snapchat maps, 24 hours stories, my eyes, Add nearby, Bitmojis, and virtual stickers. Who does not want to send a silly, five-second photo of themselves to their friends? Especially when all evidence would disappear without a trace. Indeed, Snapchat offers the hilarious, fun, and messy experience of features to its users. 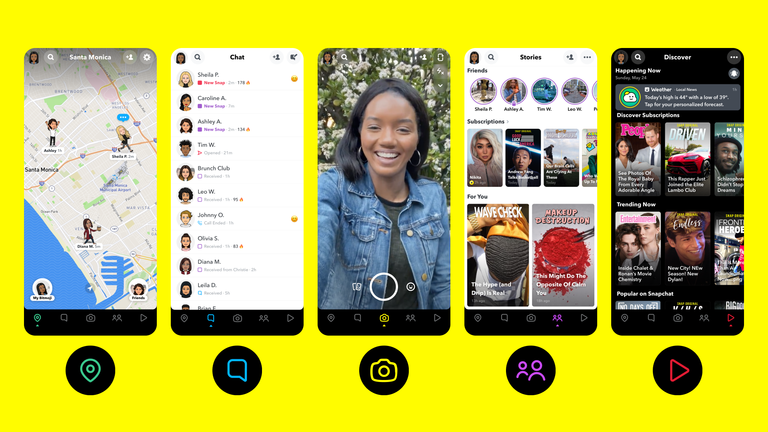 As much as controversial its user experience is, its user interface according to research has degraded to an unbelievable level. Snapchat did not follow “If it isn’t broke, don’t fix” and went straight from simple and effective to excessively developed, complicated, and high-tech. Instead of swiping left on the camera screen to find your friend’s stories, now you have to swipe right. Snap maps are much difficult to operate now and have a very inconvenient design. The entire interface looks chaotic and cluttered. It has no indigenous interaction patterns, has dozens of hidden features, and has an exorbitant learning curve. 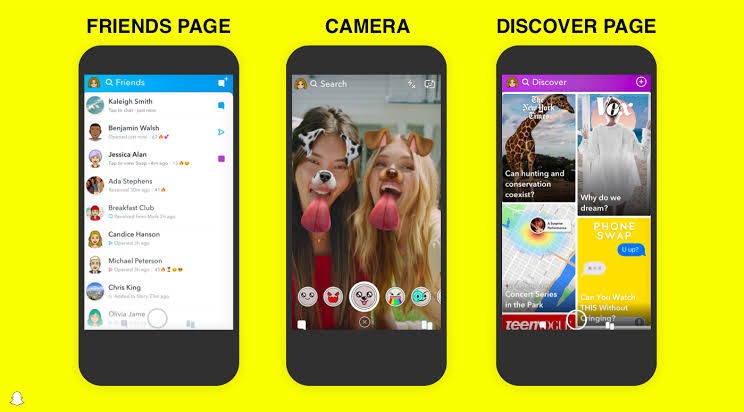 The only component of its user interface that has remained constantly positive is gamification. GAME ON? SNAP IT. It offers you to collect trophies and increase your score over time. When you open your profile on Snapchat, you can see the score under your name. It is mainly showing how active you are within the app and how much time you consume in it. After reaching a particular target, you will get a trophy like a little badge that you can show on your profile. 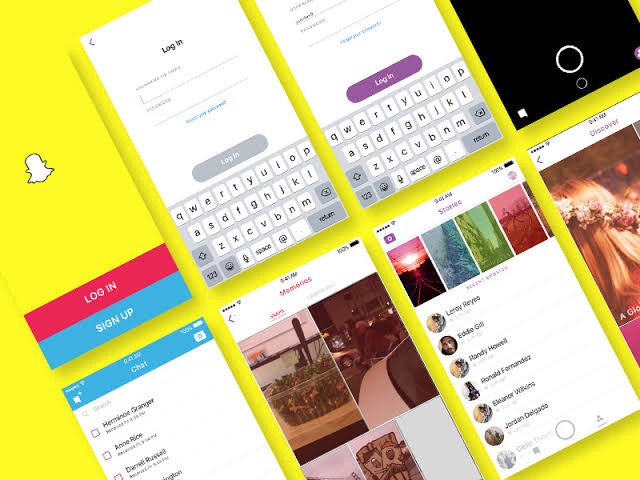 Over some time, Snapchat has faced a lot of public controversies that to an extent have shaken the entire application. The target audience has been millennials and teenagers for a long time raising the concerns of privacy, security, or confidentiality of users’ information. According to former Snapchat employee Anthony Pompliano in a lawsuit filed against Snap Inc., Spiegel made a statement in 2015 that snapchat is “only for rich people” and that he does not “want to expand into poor countries like India and Spain.” The incident sparked a Twitter trend called “#UninstallSnapchat,” in which Indian users uninstalled the app, and caused a backlash against the company in terms of low “one-star” ratings for the app in the Google Play Store and Apple’s App Store. Snapchat’s shares fell by 1.5%. In response to the allegation, Snapchat called Pompliano’s claim “ridiculous,” and elaborated that “Obviously Snapchat is for everyone. It’s available worldwide to download for free.” In March 2018, an advertisement containing a poll about Rihanna was posted stating, “Would you rather punch Chris Brown or slap Rihanna?” Rihanna tweeted that Snapchat was “insensitive to domestic violence victims” and urged fans to delete Snapchat. Snapchat even though coming under the top applications of the world has seen huge controversies and played a critical part in some of them. Users including celebrities have put a huge question mark on the application’s ethics. 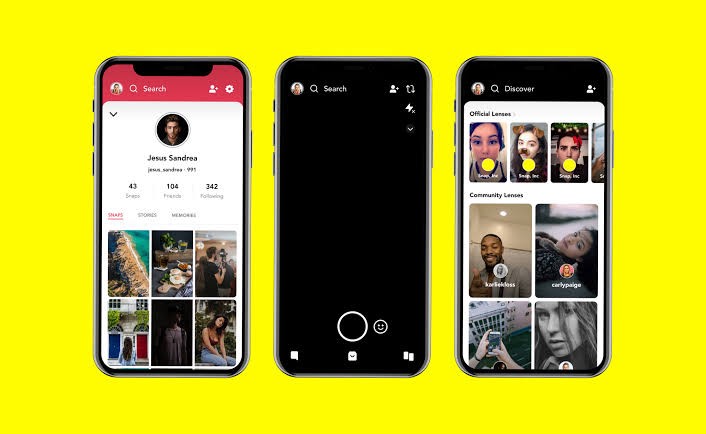 · GROOVE ON MUSIC WITH SNAPCHAT:

In the recent upgrades, Snapchat has added a new feature to IOS users known as “SOUNDS”. When you receive a Snap with Sounds, you can swipe up to view the album art, song title, and the name of the artist. A “Play This Song” link lets you listen to the full song on other streaming platforms, including Spotify, Apple Music, and SoundCloud. Music makes video creations and communication more vivid and offers a personal way to suggest music to your closest friends. On a regular, more than 4 billion Snaps are captured every day. 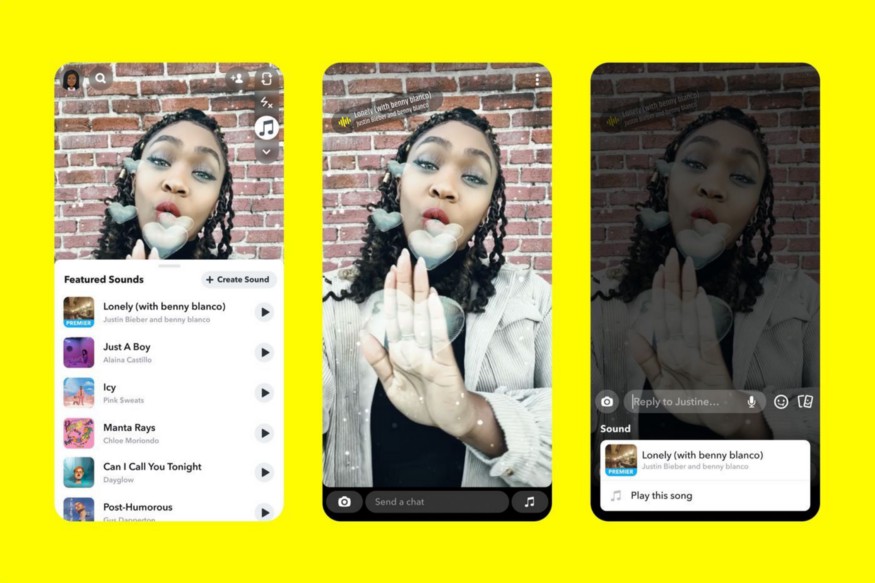 Snapchat collaborated with Amazon and now the Snapchat visual search tool will help you find what you are looking for directly in your snap. All the user needs to do is press down on an object in Snapchat’s camera and a thumbnail will appear on the screen that launches amazon’s page or website on it. Users can use Snapchat’s camera to scan a physical object or barcode, which brings up a card showing that item and similar ones along with their title, price, thumbnail picture, average review score, and Prime availability. When they tap on one, they will be sent to Amazon’s app or site to buy it. Snapchat determines if you are scanning a song, QR Snap code, or object, and then Amazon’s machine vision tech recognizes logos, artwork, package covers, or other unique identifying marks to find the product. The feature could prove useful when you do not know the name of the product you are looking at. 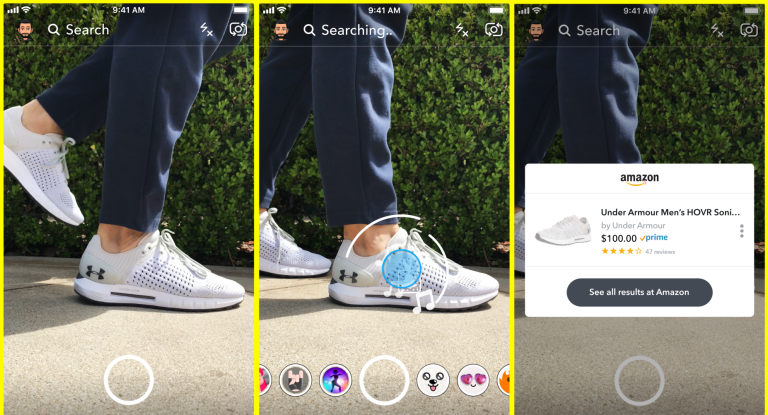 Snapchat has endured a prolonged journey of changes and redesigns — and, for the most bit, they have been extremely successful considering the statistics. It seems Snapchat’s growth has come to a halt because of its lack of listening to users. They tried to get in touch with an audience that was not just millennials and redesigned UX that simplifies the experience to other groups by dividing the app into two parts: friends and brands. If Snapchat does not get back to making their user experience truly about the users and not what the company thinks is stylish and ultramodern other social groups will conquer it. 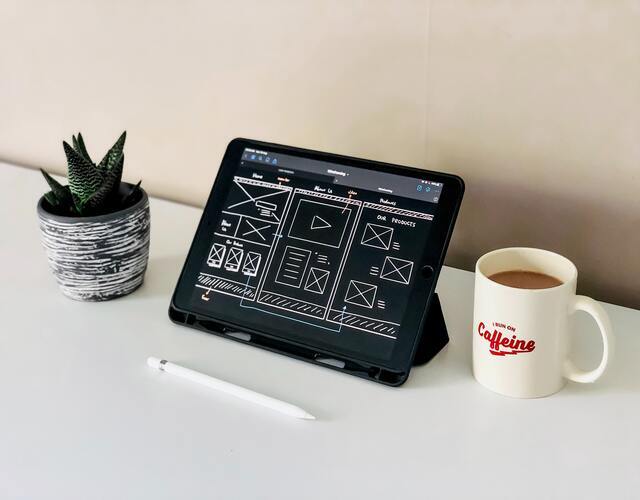 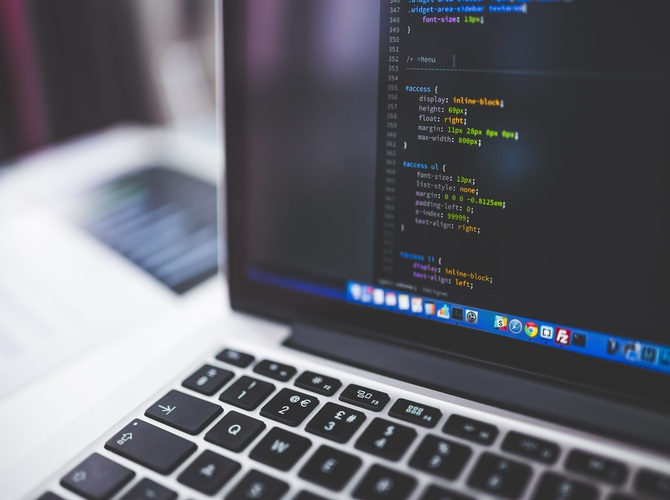