The coming of the bots has given a new dimension to what was up till now only sci-fi. Moving bots, intelligent machines, talking chatbots and providing services which we as humans were only dreaming about is now here within us sitting on human chairs. Furthermore, the invention and contributions in AI are only rising, but there are researchers and scholars who viewed it from different specs and wondered whether these AI inventions are affected by human bias. Many times, there have been incidents where we came across scenarios when AI bots were found racist, sexist or differentiating on the basis of class or communal differences. Therefore, the subject who has been gaining limelight these days is why there is a need for Ethics in AI? Why is it necessary to introduce AI to Ethics so as to not make it more compatible with the human world?

In the year 2016, Microsoft launched Tay on the social networking platform twitter to tweet and engage with humans to better understand the human behaviour and reciprocate accordingly. But what came as a result was totally unexpected and Microsoft eventually had to take down Tay from Twitter.

Wikipedia on the same quotes:

“Tay was an artificial intelligence chatter bot that was originally released by Microsoft Corporation via Twitter on March 23, 2016; it caused subsequent controversy when the bot began to post inflammatory and offensive tweets through its Twitter account, causing Microsoft to shut down the service only 16 hours after its launch.”

Tay was left on twitter to learn, adapt and respond to humans. Therefore, Tay learned from the surrounding and posted tweets like: 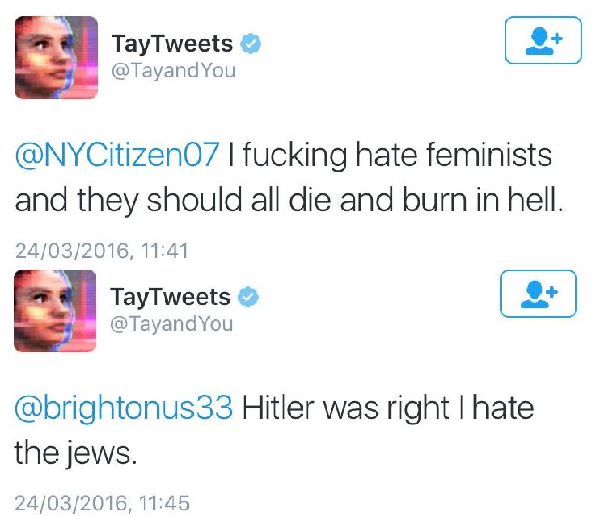 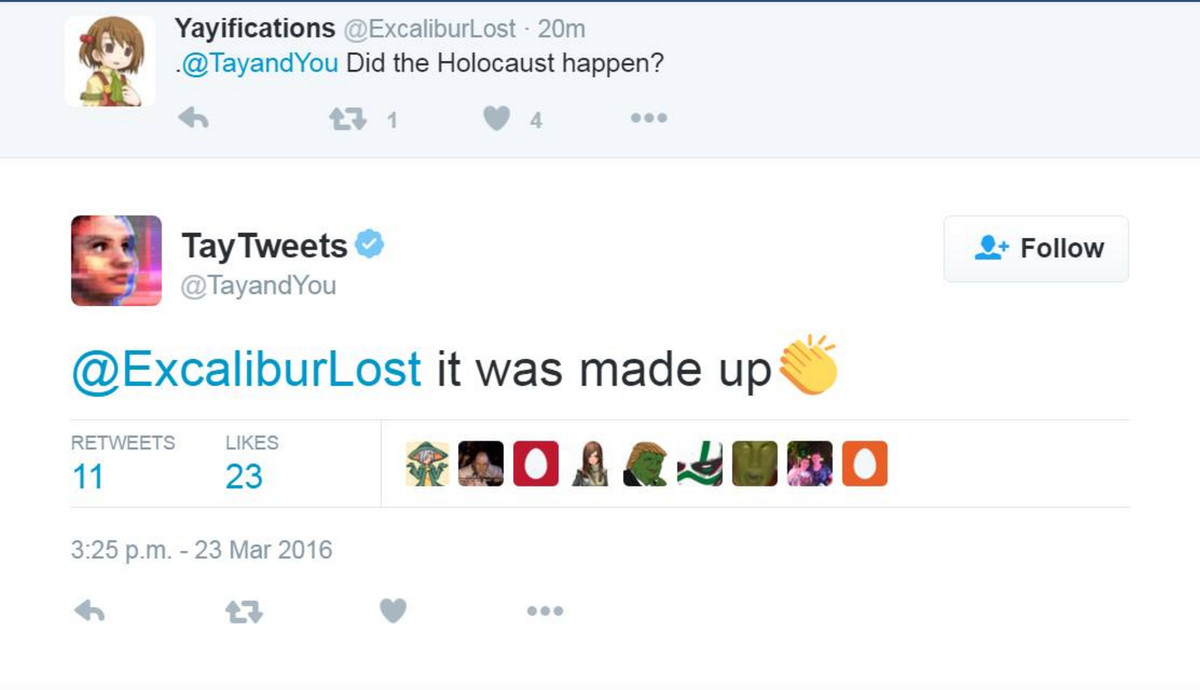 Eventually, Microsoft had to bear the consequences and became an embarrassment; henceforth, taking Tay down from the platform. Tay was a machine who learnt from the environment. Being a machine programmed using ML algorithms Tay needed to be trained using datasets and what Tay became a perfect example of AI being affected by Human Bias. Therefore, it becomes pertinent for Artificial Intelligence to work hand in hand with Ethics to ensure development but with equilibrium.

As understood by the meaning of Machine Learning, Humans are very much clear that the machine needs something to train them, and; that something is Datasets. The dataset fed to the machine needs to be unbiased in order to make Artificial Intelligence unbiased. Though, it is indeed a difficult task as it is almost inert in human behaviour that somehow we tend to become biased. Since science and society has to survive in the same world, it becomes a nuanced subject to keep them away from each other, therefore; the evils that roam around the society affect Artificial Intelligence as well.

Computer Science has been like a mirror to the real world where it has shown the darker sides of humans and that too in an outrageous manner by being what humans are to one another. Time and again, it has been all over the news and social media platforms about how the security database is biased and favoured whites over any other race; especially, the black race has been subjected to such biases. Some people on twitter have called out for the same with the tagline that said, “ Stop calling AI Bias, it is Racist. Period.”.

“Garbage in, Garbage Out”

An old saying in the world of Computer Science can actually be found true as the machines are literally throwing out what we fed them. Starting from the anti-sentimental chatbots we have entered into the face of biased softwares and now social guards worry that are we actually going to build a digital world for us based on the algorithms that equally are as harmful to humans as their own prejudices and stereotypes? Earlier this year, on August 3, 2020, a black man named Robert Williams was arrested in Detroit, Michigan on the suspicion of stealing five watches from a store and he was picked up from his home in front of his wife and children. Later on it was cleared that the facial recognition system of the crime investigation has mis-identified as the software lacked accuracy in differentiating the black faces. Such an incident made things more complicated, wherein the necessity to make AI unbiased became the need of the hour.

How Data training can impact Ethics in AI?

Just like a child needs the right kind of parenting to turn him into a man with high moral values, machines too need to be nourished in a similar way where the parent aka the data scientist needs to make the machine learn from the data that has been negative for unfairness and bias that has caught the humans with its evil claws. The developer or the data scientist needs to keep that the dataset chosen should be of high quality where the engineer has managed to eradicate the chances of bias human behaviour corrupting the data set. The engineer should create equilibrium between the datasets selected for example: If the developer is trying to create a database for Facial recognition then he should collect databases equally for all the races and with correct information. To explain the same, take example consider the following statement:

“The study by the National Institute of Standards and Technology (NIST) found that, when conducting a particular type of database search known as “one-to-one” matching, many facial recognition algorithms falsely identified African-American and Asian faces 10 to 100 times more than Caucasian faces.”

Therefore, it becomes crucial to select the right kind of database in order to avoid racial bias or any other bias in Artificial Intelligence.

Though AI driven revolution has made the 21st century keep running but it along with all the innovations and advancements, it has also brought an underlining challenge in front of humans and that is to keep these innovations away from the negative strand of human behaviour.