Respect for your privacy is coded into our DNA 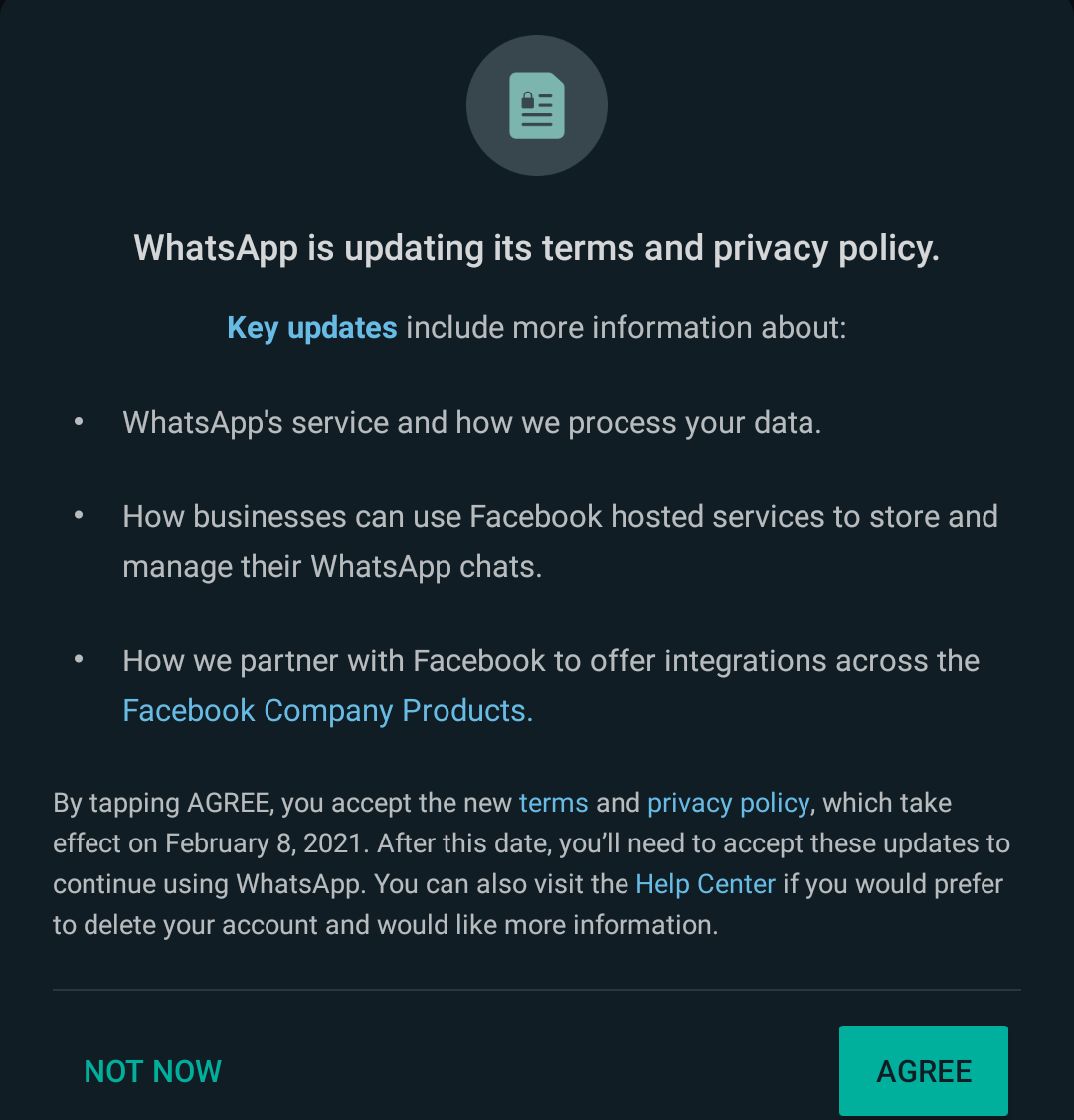 Owned by Facebook, Whatsapp has revamped its privacy policy to make the Facebook business and WhatsApp handier for their product and service providing users. The two will be integrated in a manner that Facebook will personalise WhatsApp for managing WhatsApp chats and will share the user data with Facebook Company products. As stated, the major changes will be made in the policies where the WhatsApp services will permit the Facebook Company Products to penetrate in the user data and process it according to their understanding.

In 2014, as soon as Facebook bought WhatsApp for $19 billion, the developers integrated end-to-end encryption in order to promote the privacy of the user and it was clearly stated that WhatsApp has privacy installed in their DNA by developing algorithms that provide complete privacy to the user. But, the scenario seems to be making a shift and the same was highlighted when the combat between Apple inc. and Facebook began. Almost a month ago, where Apple found problems with the new updates done to their iOS application.

Apple stated that the Whatsapp spokesperson denied that the option will be given the option to choose out of the new terms and policies; therefore, the user will be left only with the two options either to share their data with Facebook or delete their account from WhatsApp.

Whose information will be shared and with whom?

WhatsApp legal and privacy policies state that the WhatsApp user data will be shared who do have a Facebook account and ‘maybe’ of those who do not. The same information will be shared with Facebook Companies as a service provider by WhatsApp. They also pointed out that the information will be used by them to see how Facebook Company services are being used which includes mobile verification number, last online; though, WhatsApp privacy policies have stated that this information will not be used to improve any of Facebook Company’s product, services or advertisement endorsement. Though the same has created controversies and has raised questions about data breach for the same.

Talking about the general perception, people who are not aware of any malfunction related to a data breach or data theft would not read the terms and conditions. In fact, most of us are lazy enough that we accept the terms and conditions without even reading it. And, here we are talking about 2 Billion people which makes 90% of the world’s population. And, even if the people try to read the policies, either they are omitted or they are written such high legal jargons that the layman will never be able to understand it. Further, as per the updates till now, Whatsapp spokesperson have disagreed to talk further about this or provide in-depth information on the same as they have stated that it is still not to be disclosed and is confidential.

Right to choose is the fundamental right of any human being where he is given the right to choose and make decisions. Whatsapp seems to have taken that right from the user as it has made it mandatory for the user to share their private data with Facebook if they want to continue using the application. Whatsapp shares data with Facebook has become the news of 2021 where we see how these tech giants are compromising with the ethics to upgrade their system as per they seem fit. Further, the private data of the user is exposed to threats like:

All we can now advise is choose wisely, read the policies and what experts have to say on this and then make the decision but before February 8, 2021.